Depending on where you live, critters from snakes and rodents to spiders, bugs, and armadillos may have taken up residence in your crawlspace. Add a little water—or even a lot when flooding occurs—and mold and rot create indoor air quality (IAQ) problems and structural deterioration. 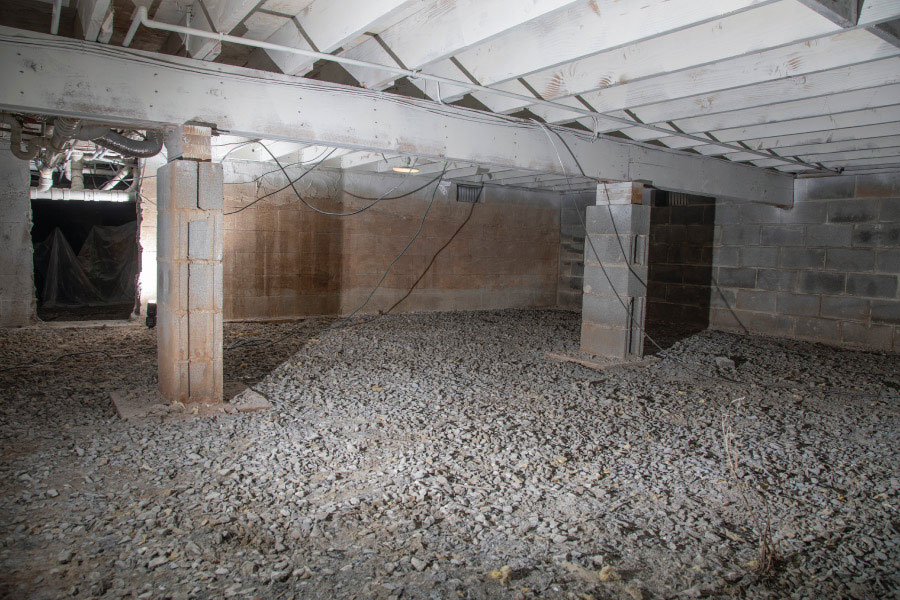 Depending on where you live, critters from snakes and rodents to spiders, bugs, and armadillos may have taken up residence in your crawlspace. Add a little water—or even a lot when flooding occurs—and mold and rot create indoor air quality (IAQ) problems and structural deterioration. Oh, and did I mention that soil gases like radon or methane can find their way into your house through the crawlspace? Research has shown that whenever it’s warmer inside your house than outside, the buoyancy of the rising warm air in the house sucks air into your home from the crawlspace. In heating-dominated climates, 40% or more of the air you breathe in your home originated in your crawlspace. Definitely scary—and it’s dark down there.

We build crawlspaces because they are cheaper to build than basements, or because ground conditions make building a basement impractical. A crawlspace can also provide service access for plumbing, electrical, and heating-and-cooling systems.

Which Crawlspaces Work Where?

In the past, Building America and others have done a lot of research around the country on crawlspaces. By looking at this research, we can learn a lot about which crawlspace configuration works where.

Historically, most crawlspaces have been vented to the exterior. In some climates—especially with the introduction of central A/C—this can cause problems. In climates with extended periods of hot-humid weather—this includes the Southeast and most of the Northeast and Midwest—closed crawlspaces are the best option. Under hot-humid conditions, warm, moist air enters the vented crawlspace from outside and can condense on the cooler surfaces. These cooler surfaces are created within the crawlspace by the shade provided by the building and the moderating effect of the contact between the crawlspace and the ground. Even when condensation doesn’t take place, relative humidity (RH) above 80% for an extended period can support mold growth and eventually rot wooden structural materials. Add A/C to the house, and the floor above the crawlspace becomes even cooler—and any ductwork in the crawlspace creates an added risk of condensation.

In closed conditioned crawlspaces, insulation is normally placed around the perimeter and not in the floor. With perimeter insulation, the house is coupled to the cooler temperatures of the ground, and this can reduce the overall amount of A/C needed to cool the house. When closed conditioned crawls are used in heating-dominated climates, this same ground coupling can actually increase the heating load of a house, but that may cost very little compared to the cost of damage done by moisture brought in by venting.

Definitions
Crawlspaces can be vented or closed. Crawlspaces without venting are usually referred to as unvented, closed, or sealed. In this article I use “closed” to refer to any crawlspace without passive vents from the crawl to the exterior.

Vented crawlspaces have the air and vapor barriers and the thermal boundary of the house in the floor assembly above the crawlspace and provide passive venting from the crawl to the exterior.

Closed (unvented) crawlspaces come in a variety of configurations. Some are actively conditioned; some have an intentional passive connection to the conditioned part of the house; and in extreme cases, some have an active dehumidification system. Insulation is normally at the perimeter of the crawl with a continuous air and vapor barrier on the ground and running up the perimeter wall to the sill plate or to a termite inspection strip, where required.

Closed power-vented crawlspaces generally look like closed unconditioned crawl spaces but include an exhaust fan to draw air from the crawlspace to the exterior. The primary advantage of this system is its ability to reverse the stack effect and decouple the air in the house from the crawl—especially during the heating season.

In the drier regions of the West, and even—surprisingly—in the marine climates of the Northwest, vented crawlspaces work acceptably most of the time. The hot-dry conditions in summer and the cold-moist conditions in winter do not cause the same problems that hot-humid conditions cause in the rest of the country. In a vented crawl, the insulation should be placed in the floor above the crawlspace, properly supported, and in contact with the floor above. There should be no air space between the insulation and the floor.

In colder climates, where basements are traditionally the norm, closed conditioned crawlspaces may be the best option to protect freeze-sensitive plumbing systems.

HVAC ductwork can have a significant impact on the crawlspace environment. From an energy perspective, well-insulated, well-sealed ducts work best in a vented crawlspace. While sealing and insulating ducts in a vented crawl is always beneficial in terms of energy savings, there can be unintended consequences that may increase the risk of condensation in heating-dominated climates. In this climate, heat loss to the crawl may help prevent condensation by maintaining higher and more stable temperatures. In cooling climates, properly sealed and insulated ducts—including a vapor barrier—can reduce the risk of condensation on cold supply ducts.

In closed crawlspaces, where the air and vapor barriers and the thermal boundary are maintained at the crawl perimeter, the energy benefits of sealing and insulating ductwork are minimal.

Insulation Materials and Proper Alignment of Air and Vapor Barriers
Walls get wet—especially in below-grade crawlspaces. Below-grade walls cannot dry to the exterior, so to avoid problems, they must dry to the interior. Vapor barriers on the interior side of batt insulation can create real problems. The figure below shows the RH inside a fiberglass batt on the interior of a crawl space perimeter wall. The batt in the figure has a vapor barrier on the interior surface that traps moisture. In the summer, the assembly is continuously at the dew point, or 100% RH. In the winter, the RH drops, but it is still above 90% almost the entire time. Totally unacceptable!

Removing the interior vapor barrier from the insulation allows drying to the interior of the crawlspace, but this may also allow additional condensation on the cold surfaces of the perimeter wall. The best solution in the figure example is to use rigid-foam insulation with sealed seams, or to use spray foam. This provides a continuous air and vapor barrier with a material that isn’t susceptible to moisture damage. The insulation thickness should be determined by the amount of insulation required for thermal performance.

Do Vented Crawlspaces Ever Really Work?

The results of tests conducted in cold-dry West and Northwest marine climates suggest that vented crawl spaces can work. The Washington State University Extension Energy Program (WSU-EEP) monitored four test houses in Vancouver and Moses Lake, Washington, for over a year and found that the vented crawls rarely, if ever, reached dew point and that they remained above 80% RH only for brief periods of time. Monitoring of wood moisture content in the crawls showed no moisture buildup, and while the vented crawlspaces in the test houses did maintain higher RH levels on average than found in closed crawlspaces, the RH levels were not a problem. See the figures below.

In any crawlspace, site water must be properly managed. Vented crawls should be considered only where there is little risk of condensation and no prolonged periods of high RH. Where the average ground temperature is above the average seasonal outdoor dew point, crawl temperatures should be above dew point most of the time, and moisture introduced by venting shouldn’t be a major problem.

Reversing the stack effect with power venting should improve IAQ by decoupling the house from the crawlspace. The price of decoupling is the added cost of running and maintaining the crawl space exhaust fan. In closed crawls without power venting, or if the exhaust fan fails, the lower dilution rate creates the risk of a higher concentration of pollutants entering the house from the crawl.

Here are some general tips for taming the beast: 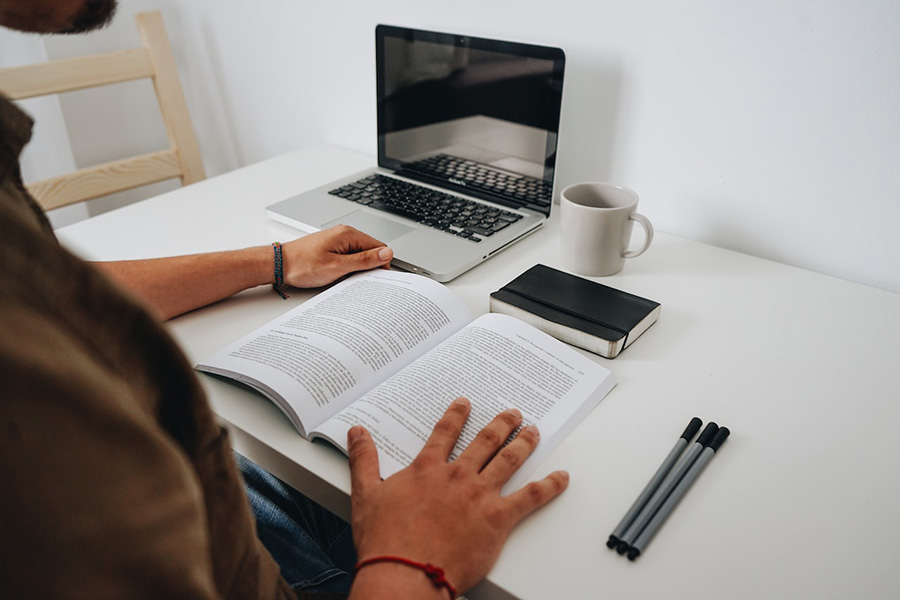 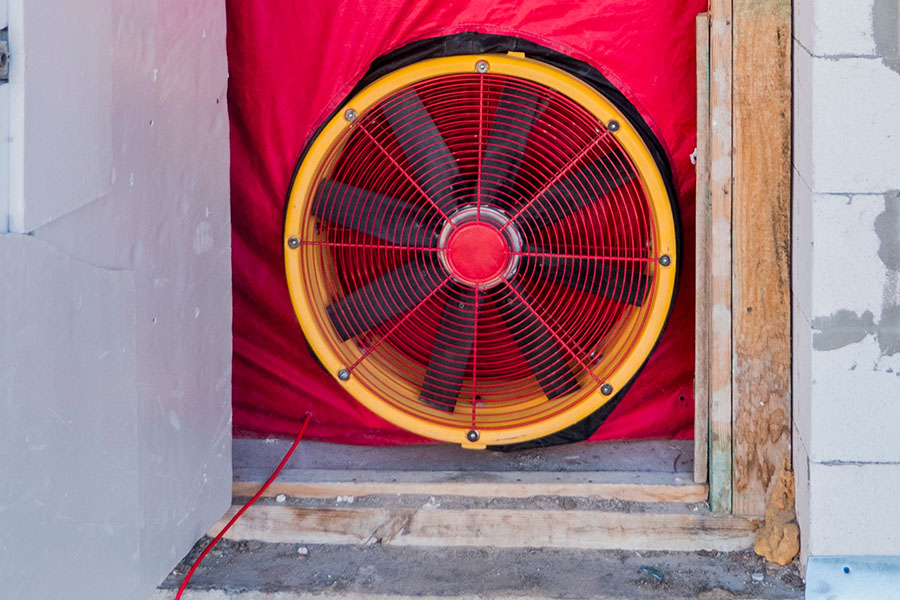 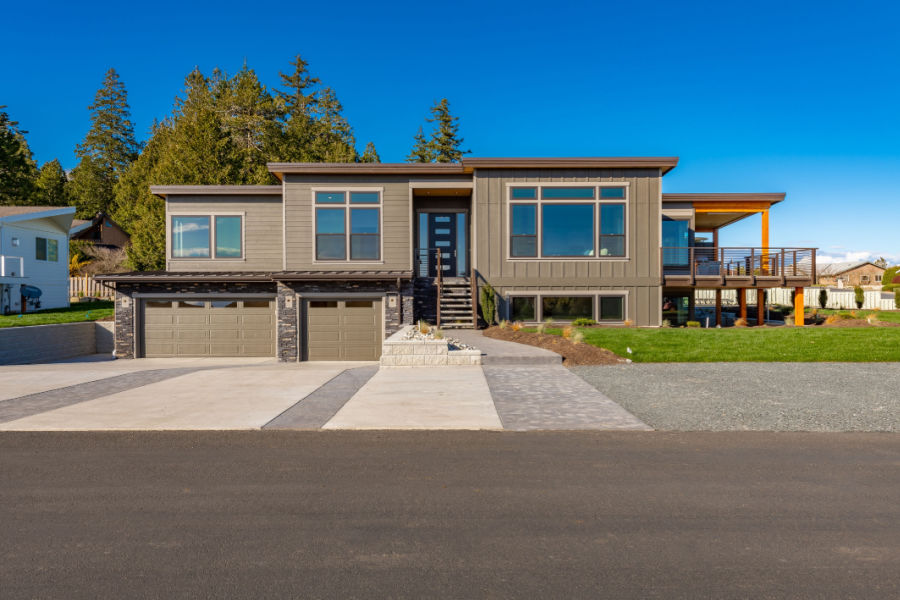 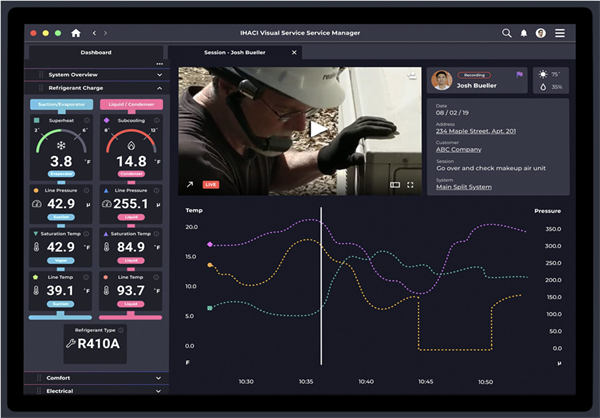